I think I can safely say that the festive season is in full swing. London’s Christmas lights are up. Winter Wonderland is grid-locked as boyfriends try and impress with their throwing skills, all in order to win a crappy cuddly toy for their ‘mrs’ (I haven’t done this by the way). I’m currently sitting in a really cool café in Kensal Rise and Away in a Manger is blurting out of the sound system, Jesus! No pun intended.

This year, I thought I would be super organized and set off on the hunt for Christmas presents early (Christmas Eve is usually my day when I blitz it). What better place than Westfield Shopping Centre, all under one-roof to get the job done with no problems. Well after endlessly marching around, I ended up purchasing zilch. No Christmas presents, no cards, NOTHING. Instead I bought myself a wooly jumper, a hat and a t-shirt. Why does this always happen? I suppose you could say I was in my comfort zone. I know what I like, what shops to go into, and how much I want to spend.

This could be said with an individuals training regime. They have certain exercises/bodyparts which they love to train and often bypass the nitty-gritty stuff . An area where a lot of people, myself included, generally neglect is that mobility and prehabilitation. As a personal trainer, fitness coach, slave driver and other expletives that I won’t share with you in this blog, I believe that my first and foremost responsibility is to keep my clients injury free. That’s why I predominantly spend the first part of a session conducting some pre-habilitation work. Foam Rolling, mobilization exercises, dynamic stretching etc.

Take you’re everyday office worker. Sitting in the same position for hours upon hours, week after week. Our muscles have a great memory, and learn to adapt. So by sitting in the same position for a prolonged period of time, our muscles envelop around that position. Meaning that our muscles that flex the hip (predominantly the psoas major, minor and iliacus) shorten and become tight. Our thoracic spine becomes more kyphosed as we slouch over the desk emulating the posture of Ephialtes from the film 300. 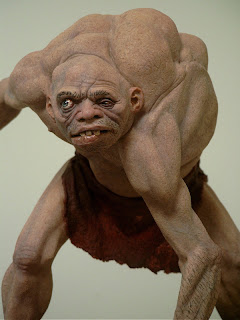 It’s not the most attractive look, and over time can lead to some serious anatomical complications. If that picture doesn’t get you sitting up straight then I don’t know what will!

I’m a big fan of Gray Cook’s Functional Movement Screen (FMS), it’s a screening process that highlights areas where the individual may have muscular imbalances, certain areas of tightness and pinpoints where attention (in the form of stretching, mobilizing and soft tissue work) needs to be addressed. The FMS came out of research that suggested that most of the body’s most basic and fundamental movement patterns were going un-assessed in a training environment. Dysfunctions were being trained around. Strength was being added to a dysfunctional body and the correction of weaknesses was being ignored. As a result, this approach led to injury and the restriction of activity for that individual. From the results of the FMS, the appropriate exercises are implemented into an individuals program to improve their range of movement around a joint.

Unfortunately, there are many trainers in this world that neglect these areas of concern. Often individuals are looking for the quick fix, take the biggest loser for example. The exercises that those ‘trainers’ have those poor people doing is damn right dangerous. Due to their body shape certain muscles haven’t been functioning for years and as a result other muscles are compensating and working harder, adding increased strain on an already fragile body. For example performing a heavily weighted squat with tight hip flexors automatically brings excess strain to the lumbar spine to over-compensate. That’s a car crash waiting to happen. Talking of car crashes…

After years of playing rugby my shoulders have taken a bit of a battering. Even though I’m classified as a pretty boy as I stand-out in the backline waiting for the ball, defence and tackling is an area of the game that I love. After picking up a niggling shoulder injury, as most people do, I neglected it and continued to carry on playing. ‘Re-hab is for pussy’s” what a load of Bulls*** Because of this ‘macho’ opinion I’m now having to work hard to regain the range of movement in my shoulders in order for me to comprehensively perform overhead lifting exercises.

Now I’m not saying neglect the other aspects of your fitness work. What I am saying is that you will notice a dramatic difference in your lifting performance/running efficiency/agility and balance if you dedicate just 10-15 mins of each exercise session to some pre-hab work. Everytime I train in a gym I winch at some of the posture of  some of the gym meat-heads. Yes they may be able to shift serious amounts of weight and if that’s their goal then fine. But by having the suppleness of a stick they are only setting themselves up for a later life of restricted movement. Lets not have a population of Ephilates, get stretching and mobilising!!