It’s a Monday morning in London, with the skies overcast and a gloomy outlook for the rest of the day, I think the weather sums up how the capital is feeling after a spectacular two weeks of Olympic action.


After discussing my favourite Olympic moments in my previous blog, I want to quote from one of the greatest ever Olympians, Jesse Owens. Jesse won 4 gold medals in the 1936 Berlin Olympics in the 100m, 200m, long jump and 4x100m relay, defying Hitler’s expectations. I think this quote really personifies the attitude and belief of an Olympic Athlete:


‘We all have dreams, but in order to make dreams come into reality, it takes an awful lot of determination, dedication, self discipline and effort.’


Olympic athletes do not reach the pinnacle of their sport through chance.  It takes continual commitment and hard graft. I remember watching a documentary on the British Rowing team leading up to the 2000 Sydney Olympics and seeing Steve Redgrave collapse from exhaustion on the rowing machine after completing his last repetition. He is one of Britain’s most celebrated Olympians and I felt that this clip just showed what levels some of our athletes go to in order to achieve their dream:


Throughout the last two weeks the British athletes have inspired more than just a generation. They have inspired the whole population. They have shown people that anyone can achieve their dream. In Mo Farah’s interview after winning the 5000m gold medal he said ‘ Anything is possible, it’s just down to hard work and grafting.’ Now I’m not saying for people to jump on the rowing machine and row until you pass-out, or run 400m reps until you throw-up, far from it. But put this into perspective, if you’re looking to drop a dress size, increase your one rep max or improve your 5km time, it is possible.


The only thing that stands in your way of fulfilling your desired goal is yourself. So on this dreary Monday morning with a large bout of post Olympics blues, set yourself a goal for the week, a realistic goal that you can measure. Start off on a small scale and reassess after the week has ended. If you believe it is attainable, increase the boundaries of that goal, this way you are always striving for improvement, give it a try. Happy Monday!
Posted by Unknown at 05:01 No comments:

My Favourite Olympic Moments So Far...


For the past two weeks, London has played host to the 2012 Olympic Games. It all kicked off with a spectacular Opening Ceremony Directed by the Film guru Danny Boyle, responsible for films such as Academy award winning, Slumdog Millionaire. I thought he did a fantastic job to emulate the British culture and how the country has changed throughout the centuries.

It’s hard to single out one specific moment so far during the London 2012 Olympics. So I’m going to discuss a few highlights...

Sir Chris Hoy – Track Cycling
I must start by mentioning our greatest ever Olympian, Sir Chris Hoy. With a total of six gold medals he surpassed Sir Steve Redgrave’s record of 5 golds by winning the Mens Keirin event a few days ago. At 36 years old Sir Chris can be considered one of the veterans of the Olympic Team, featuring in three successive Olympics, winning gold in Athens in 2004, three golds in Beijing in 2008 and two in London. Below is a picture of Sir Chris leg pressing 631kg... now that’s impressive. 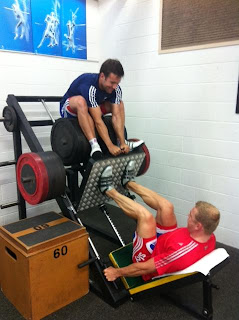 Mark Hunter and Zac Purchase – Mens lightweight Double Sculls
Mark and Zac have been dominating the lightweight sculls for the previous three years leading up to the 2012 Olympics, winning European and World Championships. After a dramatic final, where the race had to be restarted due to Zac’s seat falling off their boat, they finished 2nd and won a silver medal.  Both pushed their bodies to the absolute limit, Mark had to be helped from the boat by British Olympic Rowing Legend Sir Steve Redgrave, and the interview, which can be seen by following the link below, is heart wrenching.

This just shows how much it means to win an Olympic gold medal.  Four years of dedication, hard work and sacrifice comes down to one race. Many of the British athletes who have ‘failed’ to win an Olympic gold have conducted interviews and apologised for their performance. In my opinion, becoming an Olympic athlete is an amazing achievement and it shows that you are at the pinnacle of your sport and a rarity in this country. The athletes have nothing to apologise for, they represent their country with pride and passion, where with other sports this could be severely questioned. I hope Zac and Mark are back in four years time to compete and win the gold medal in Rio in 2016.

I have saved quite simply the best until last. Michael Phelps has amassed 22 Olympic Medals (18 gold) over four Olympic Games. He holds the largest amount of medals in the history of the Olympics and has bowed out at the very top of his sport, here at London 2012. Although Phelps got off to a shaky start, not medalling in his first event and then winning bronze. He came into his own and triumphed with 4 gold medals. Phelps himself believes that his record of 22 medals can be broken, I don’ think anyone has a chance...

With Great Britain overhauling their greatest medal count at these games, UK Sport and other National Governing Bodies have deemed the London 2012 Games a success. It has been enthralling to watch and I have been lucky enough to attend 6 different sports events live, the atmosphere has been electric at each one. With still a few days of competition left, and the Para-Olympics to come, London 2012 has been an amazing spectacle.
Posted by James at 08:10 No comments: